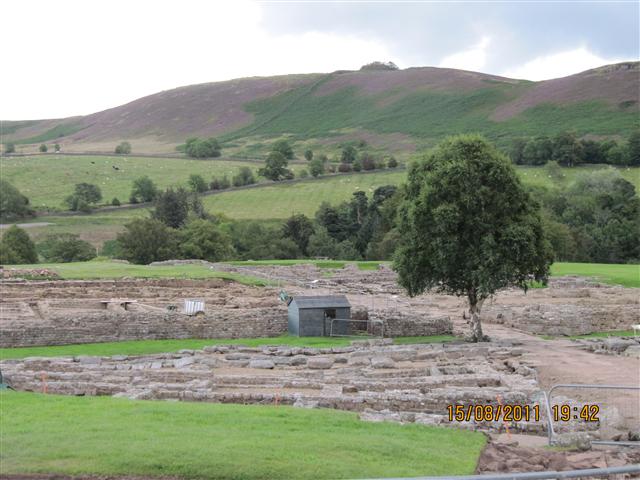 David (known as DV) and I arrived on Sunday afternoon at the newly built Hedley Centre – the purpose-built accommodation and conference centre adjacent to the Vindolanda museum, just yards from the Roman site. We were the first to arrive, and were let in Pauline the cook, caretaker, house-mother and general fount of all knowledge.

The first floor comprises the accommodation for 10 people in a mix of single, twin and triple rooms... Our room was bright and spotlessly clean, with 3 single beds, en suite, and a work desk with 'hospitality tray', but only one wardrobe, and limited clothes space. We used the spare third bed as a depository for our bags and kit. There is a vending machine containing snacks and cold drinks located in the corridor leading to the bedrooms. On the ground floor is the conference room, Lounge/dining area and kitchen. There is also a clothes drying room.

Only 7 were staying at the centre that week: all first-timers at Vindolanda, and some had never lifted a trowel before. There was an Archaeology student from the USA, a housewife from Norway, another from Australia, and 4 of us from the UK. Another Brit had made the fateful decision to walk from Bardon Mill railway station to the site – if you follow the sign posts it is about 5 miles, and the long way round! There is a shorter route, but it's not signposted. If you ever arrive by train – get a taxi to the site.

At dinner we were introduced to Kevin Kerr, one time volunteer and now one of the dig supervisors.

The first evening, after dinner DV and I decided to take the 40-minute walk to the local pub – the Twice Brewed Inn.

The pub was busy and offers a reasonable selection of bar meals. It also has a restaurant, and accommodation. It would make a good, but more expensive, alternative to the Hedley Centre. There is plenty of other accommodation within driving distance of Vindolanda. The long walk back after a few drinks seemed much longer than the way there! For the rest of the week, we went by car, although it was a longer, circuitous route, to avoid the pot-holed lane along which we had walked.

After a substantial breakfast the entire volunteer team of about 30 people congregated at the Centre for an initial briefing, and introductions before heading up to the site. DV and I were allocated to Kevin's team. The previous week a large defensive stone wall had been found. It was constructed on a clay rampart immediately to the west of the baths in the vicus, and to the west of that a broad and deep defensive ditch was found. This feature came as a complete surprise to the archaeologists on the site as the impressive structure had not shown on the geophysical survey to any great extent.

Only a small section of the wall had been uncovered, and DV and I were given the task of extending the trench over the ditch on the outside of the new wall with the intention of seeing how far and where it went. (See picture left). 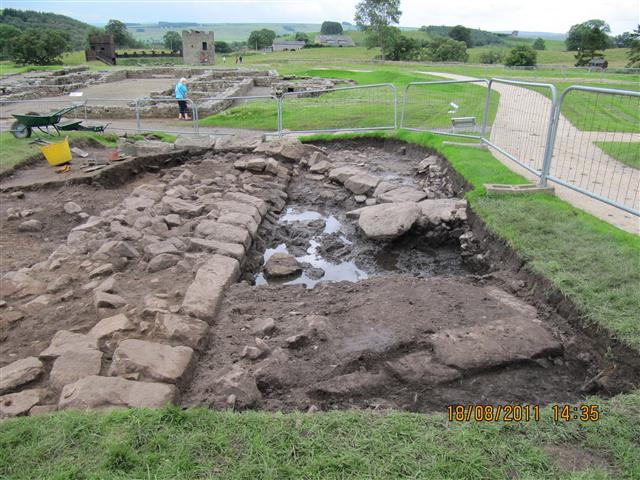 There was a line of 'rubble' leading away at an angle from the wall, which we later decided was part of the collapsed wall. Once that was cleared we were inside the ditch, and hoping that vicus garbage might have been deposited there.

Other residents of the Hedley Centre were given the area inside the wall, which appeared to be the interior of a building, which later revealed traces of a hearth, and an unidentified coin, but very little else.

Having removed the thick turf and some topsoil yesterday from an area about 2m square, we began taking the level down to the already excavated level (about 0.5m). There were no finds at all above 0.3m, but below that there were some burnt bone fragments, some small glazed and unglazed pottery sherds, some rust areas, and a piece of green glass.

Overnight rain had added a couple of inches of water to the bottom of the trench that refused to drain away, but was useful for washing finds.. Today we got the entire trench down to the previously excavated level. Finds included plenty of burnt bone (mainly cow and cow's teeth, I'm told), glass, pottery, and a gaming token. At that level there appears to have been a hearth, or maybe just a site of rubbish burning. Very little was found very close

to the wall. Tomorrow we plan to extend the trench further along the wall.

As our trench was very close to the public pathway, we were continually being asked: 'Have you found anything interesting?' Our tray of small finds was of far more interest than the substantial wall! The site Director, Andy Birley had warned us that he was on 'BS patrol', and if we were asked questions about the site, to refer them to one of the supervisors, rather than give incorrect information.

Raining in the morning, so we were treated to a training session in the conference room. Up on site by around 11.00am and another 2m x 2m area of turf and topsoil was lifted, and about a foot down were revealed the narrow edges of two large stones positioned at right-angles to each other. This caused some excitement as Andy thought that they might be the top of a cist burial, and I was told to work around the outside of the stones to a depth of about 2 inches' for now', and go no further – very frustrating!

It had been arranged that the digging team would visit the Roman Army Museum in the afternoon, so we tidied the trench and finished work for the day at 3.00pm. 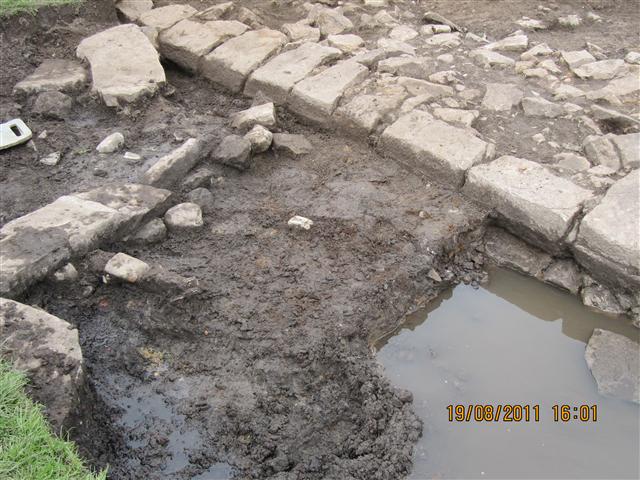 Further overnight rain had made other trenches unworkable, so the squad that had been working in the fort came to help out in the vicus. Our trench was again extended by two of the newcomers. DV and I continued on from yesterday. We were instructed to start peeling away the interior of the suspected cist, keeping a sharp eye out for anything, especially bone…but there was just earth and rubble. We unearthed a few cow's teeth and similar finds to yesterday. By lunch we had about ten items in the finds tray.

After lunch, we were getting down to the level of burning that we had reached earlier in the week, and many more finds began to appear – larger pieces of pot, some glazed and patterned, burnt animal bone, pieces of blue and green glass and pieces of black 'face-pot' – apparently used for cremations or other religious purposes. It seemed that every time the trowel went in, a find came out. We think that the

cist was merely an 'L-shaped' arrangement of two large containing slabs for a bonfire.

The extended trench had exposed more possible structures, initially thought to be an apse (although perhaps not solid enough for that), and very few finds.

Sadly we packed away out gear, and headed back for a final evening's camaraderie at the Twice Brewed.

Upon later examining the finds from the area, mostly pottery from inside the ditch, it became clear that this was a mid-second century defensive work which was either late Hadrianic (Hadrian died in AD138) or early Antonine (AD141-AD192)in date. The outside of the wall had been finely built with well-dressed and chamfered stones, a feature which is replicated on the south west corner of the 3rd century fort.

During the following two weeks – the last of the digging season, a team from Newcastle University extended the trench along the wall for about another twenty metres, and it's still going!